U.S. Army Lieutenant Colonel (Retired) Patrick Schreiber solemnly swore to support and defend the Constitution of the United States against all enemies, foreign and domestic; that he will bear true faith and allegiance to the same; and that he will obey the orders of the President of the United States and the orders of the officers appointed over him, according to regulations and the Uniform Code of Military Justice. But, so help him God, Lt. Col. Schreiber and his wife, Soo Jin Ye, are prepared to leave the U.S. with their daughter, Hyebin, if Immigration and Customs Enforcement (ICE) deports her to South Korea.

Lt. Col. Schreiber and Mrs. Schreiber, a lawful U.S. permanent resident, were married on January 7, 2000 in Killeen, Texas. Like many military families, the couple endured long periods of separation while Lt. Col. Schreiber served six combat tours. Though happily married, they were unable to have children of their own.

As time passed and the bond between them strengthened, it was clear to the Schreibers that Hyebin had become their daughter in their hearts. To make it official, the two filed for adoption in Kansas, and Hyebin’s biological parents freely and voluntarily consented. On November 17, 2014, the Kansas Court granted the adoption making Hyebin, in each and every way, the Schreibers’ legitimate daughter.

Exactly one month later, on December 17, 2014, at the age of 17, Hyebin received a valid birth certificate from the Kansas Department of Health and Environment, Office of Vital Statistics, and her foreign birth certificate was forever sealed. Hyebin’s Kansas birth record, which is now the only legitimate birth record she has, lists U.S. Army Lt. Col. Patrick Schreiber as “father” and Mrs. Schreiber as “mother.” Under Kansas law, Hyebin is entitled to “the same personal and property rights as a birth child of her adoptive parents and her parents are entitled to exercise all rights due to birth parents and be subject to all the liabilities of that relationship.” In other words, Hyebin and her parents were now a bona fide family.

Recognizing the Schreibers as a valid and legitimate family, the Department of Defense issued Hyebin, as the daughter of an Army officer, her military ID card on February 4, 2015. During Lt. Col. Schreiber’s tour of duty, Hyebin and her mother filled the gap in their family with Skype calls and emails from Kansas to Afghanistan. Like all military families, the times between reunions and deployments were the happiest for the Schreiber family.

Hyebin has a Kansas-state issued birth certificate. She is the daughter of a decorated Army officer and is recognized by the Department of Defense as the legal daughter of the Schreiber’s. She is attending the University of Kansas, for which her parents are paying more than $40,000 per year in tuition, has an F-1 Visa and will graduate in 2019.

Surprisingly, what she doesn’t have is U.S. citizenship, nor a clear path to it, which she’ll need to remain with her parents in the country once she graduates college and her F-1 Visa expires.

If anyone understands the importance of following rules to the letter it is Lt. Col. Patrick Schreiber. To ensure Hyebin was compliant with U.S. immigration laws, he went to United States Citizenship and Immigration Services (USCIS) and asked for assistance with his daughter’s immigration status. USCIS officers told Lt. Col. Patrick Schreiber that his daughter was an American citizen based on the adoption and they instructed him to file a Form N-600, Application for a Certificate of Citizenship. So, he did.

Yet on February 24, 2015, the Kansas City, Missouri District Office denied Hyebin’s application.Confused, Lt. Col. Schreiber returned to USCIS. This time, USCIS officers told him to file a visa petition for his daughter. Which he did. He filed an I-130 Petition for Alien Relative, based on the definition of a child under 8 U.S.C. §1101(b) (1)(C), and classifying Hyebin as an immediate relative, his and Mrs. Schreiber’s daughter.

On November 10, 2015, USCIS issued a Notice of Intent to Deny the petition, despite the visa petition being submitted under 8 U.S.C. §1101(b)(1)(C), which is based on Hyebin becoming the Schreibers’ legitimate daughter before she turned 18.

USCIS’s reason was that since Hyebin had been adopted, she needed to comply with the requirements of 8 U.S.C. §1101(b)(1)(E), which of course she could not since she had been adopted after turning 16. In response, Lt. Col. Schreiber urged USCIS to consider his daughter’s petition under an alternative provision, §1101(b)(1)(C). Without any analysis or considering whether §1101(b)(1)(C) applied, USCIS denied the I-130 petition on June 10, 2016.

Lt. Col. Schreiber quickly appealed the decision to the Board of Immigration Appeals (BIA), asking them to consider his daughter’s eligibility as a child under 8 U.S.C. §1101(b) (1)(C). The Board dealt the Schreibers a blow on June 5, 2017, a day the family will never forget. In just four short paragraphs, the BIA abruptly denied Lt. Col. Schreiber’s appeal without any real analysis, arguing that his request to consider his daughter as a child under the section noted above doesn’t apply to adopted children. Hyebin was 17 years old when the adoption was legalized. This was the Schreibers’ last chance category under which to fight for their daughter’s citizenship – a child that Kansas and the Department of Defense acknowledge as the Schreibers’ legal daughter in every way.

“Of all the immigration cases our firm takes on, this one makes me the angriest. Here we have a decorated, recently retired military officer whose family has grown closer and stronger even during Lt. Col. Schreiber’s long tours of duty as he led our troops in Iraq and Afghanistan,” says Sharma-Crawford. “He received orders to return to Afghanistan, once again, putting his life on the line for his country. He followed orders to report to the Middle East before filing the adoption, believing it could be finalized upon his return. But by the time he did, his daughter had turned 17, which has created this fiasco for his family. In hindsight, had he known, Lt. Col. Schreiber would have adopted Hyebin at 15.”

Sharma-Crawford has filed Hyebin’s case with the Federal District Court of Kansas, and it is pending before Judge Julie Robinson. “There is no timeline on when Judge Robinson will rule on it. She can take as much time as she wants. I don’t know of no other case such as this. Given the uniqueness of the issues raised, further litigation may come; we just don’t know which side may appeal. But we are very hopeful that in the end this family will find a just result,” explains Sharma-Crawford.

In the meantime, Hyebin continues excelling in her studies at the University of Kansas. On March 8th, Representatives Adam Smith (Wash.) and Chris Smith (N.J.), along with U.S. Senators Roy Blunt (Mo.) and Mazie K. Hirono (Hawaii), introduced the bipartisan Adoptee Citizenship Act of 2018. The bill sponsored by Blunt, Hirono, Amy Klobuchar (MN) and Susan Collins (ME), if passed, would close a loophole in the Child Citizenship Act of 2000 (CCA), which has prevented internationally-adopted children, who are now adults, from receiving U.S. citizenship despite being raised by American parents. “We are so excited these Senators and Congressmen are taking steps to recognize that immigration laws have left many adopted children without a remedy,” says “Sharma-Crawford. “This bill is a start in the right direction to bring about much needed change.”

A Parent’s Love for a Child Knows No Boundaries

Long ago, lawmakers addressed the definition of a child. They provided the greatest rationality for allowing Lt. Col. Schreiber’s petition under the U.S. immigration laws when they indicated in H.R. REP. NO. 85-1199, pt. 2 (1957) “in view of the clearly expressed legislative intention to keep together the family unit wherever possible, it would appear to be a desirable result, based upon legal and equitable considerations, to adopt a liberal construction. No harm could possibly result from such a construction, and the consequences would fulfill the humane considerations involved in keeping intact the family unit.”

Not filing Heybin’s adoption papers before leaving on his sixth tour of duty is Lt. Col. Schreiber’s greatest regret in life. If this matter of citizenship isn’t resolved, the Shreibers’ daughter is left stateless and at risk for deportation with no stable family to return to in South Korea.

Lt. Col. Schreiber has said that if Hyebin is not allowed to stay, he and his wife will leave the U.S. and return to South Korea with their daughter. Can you imagine? An American veteran, who has solemnly sworn to support and defend the Constitution of the United States, and his wife forced to leave the country he served and loves because the daughter they love is not welcome here. 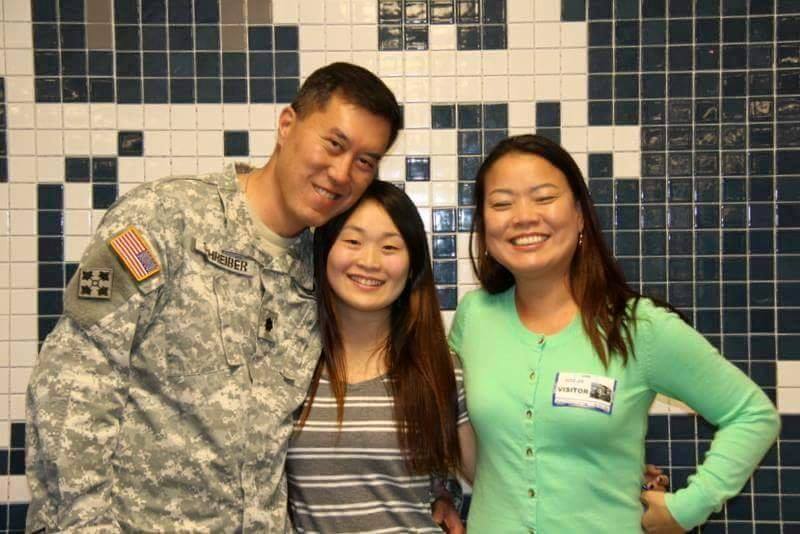